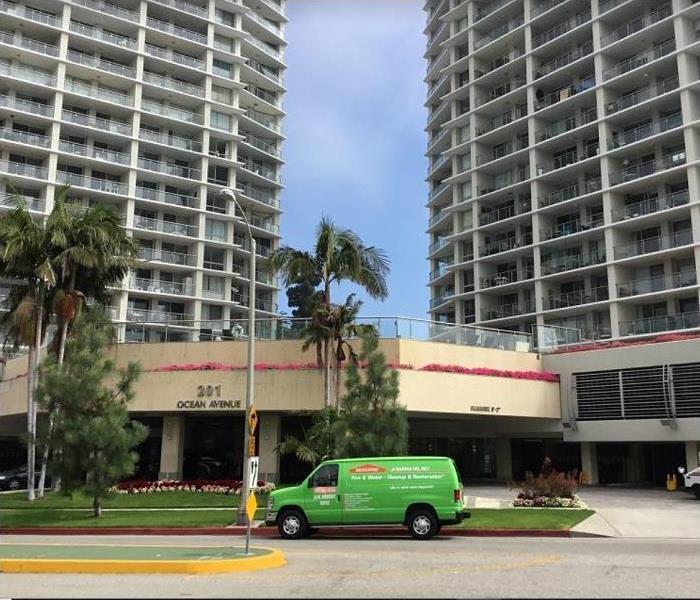 No matter the size of your commercial property, SERVPRO can handle the damage.

Located in Los Angeles County, California, Marina del Rey is a lovely little unincorporated seaside community. Also, a census-designated place (CDP), this community had a population of 8,866 when the 2010 United States Census was taken.

Within this fisherman's village, you will find striking views of the Marina as well as the most sizable man-made harbor for small crafts in the world. Here, the Marina features eight basins that can dock 5,300 boats and is also the home port for about 6,500 watercraft at various times. In 1997, the Los Angeles Times said that this harbor might be the most valuable resource in the entire county.

Before Marina del Rey, California, was developed as a harbor for small crafts, it was salt marsh fed land by freshwater entered from Ballona Creek. The region was frequented by duck and fowl hunters, and more. It used to be referred to as mudflats by a member of the LA County Board of Supervisors by the name of Burton W. Chance. However, the area today is generally referred to as wetlands.

During the mid-19th century, Louis Mesmer and Moye C. Wicks had ideas of turning this area into a commercial-style port. The Ballona Development Company was formed in 1888 to develop the site, but the company went bankrupt just three years later. Moses Sherman bought the port and 1,000 acres of land all around Port Ballona and Ballona lagoon in 1902 under the Beach Land Company name and renamed Del Rey before the port took on Playa del Rey's title.

In 1887, the California Central Railway was developed and later became known as the Santa Fe Railway. It later became Atchison, Topeka, and Santa Fe Railroad. This railroad went from the port to Redondo Junction.

The United States Army Corps of Engineers revisited the idea of having a commercial harbor here in 1916. However, it was deemed impractical from an economic standpoint. U.S. Congress set up a re-evaluation of this determination in 1936. The Army Corps of Engineers then came back with a more favorable resolution. Unfortunately, the concept of Marina del Rey harbor lost to San Pedro for a commercial harbor. Therefore, the Port of Los Angeles received the funding development.

In 1953 the Los Angeles County Board of Supervisors set up a $2 million loan to fund marina construction and broke ground shortly after. However, the Marina was in danger during a winter storm in 1962-1963 when construction was nearly complete. The storm brought millions in damage for both the watercraft anchored in the area and the Marina itself. Because of this, a breakwater was built at the Marina's mouth as a safeguard. Marina del Rey was then formally dedicated in April of 1965.

There are many things that Marina del Rey is known for, including incredible lodging and unbelievable attractions. Due to the proximity to LAX, it makes traveling to and from easy. It is a stunning coastal location within the Westside of Los Angeles, so it is no wonder why it has turned into a Southern California getaway destination for many. Anyone visiting the area will find many popular tourist attractions within a short driving distance. Once you have experienced a day filled with recreation and exploration, you will then have plenty of waterfront hotels to rest your head – many of which come with stunning harbor views.

When it comes to attractions and must-see locations, some of the top options in the area include:

Burton W. Chace Park – Located on Mindanao Way, this is a 10-acre park that juts into the main channel, rich with the harbor's views. There is a paved walking path that you can enjoy around the perimeter, or there is a beach where you can sit to enjoy the sunrise or sunset.

Marina "Mother's" Beach – When you want a peaceful place to relax, this is a 12-acre lagoon on Admiralty Way just right for bringing the family. Lifeguards staff the beach on a seasonal basis, and you will find various amenities on-site, including sheltered picnic tables, playground equipment, and access to restrooms.

Yvonne B. Burke Park – This is a park located within the Marina's heart on Admiralty Way. Here, you will find a free parcourse fitness circuit as well as a bike trail that runs straight through the park.

Seeking assistance quickly when you notice flooding in your Marina del Rey retail space helps to avoid further damage. Many water incidents get covered by your insurance, and our team here at SERVPRO is available to help each step of the way. Because of the risk of electric shock and other hazards with a water emergency, it is best to let trained technicians assess the space and proceed with the cleanup.

When you call us for flood damage in Marina del Rey, we are here to tackle:

We know that you may have questions or feel overwhelmed when faced with flood damage in your place of business. SERVPRO of Marina Del Rey/Westchester/El Segundo is available 24/7 to get the job done and give you the peace of mind you need. Call us for emergency service at (310) 333-0654.